CALAMITY JANE WAS NO DORIS DAY

It is sometimes difficult to separate fact from fiction, as the false narrative about her has been perpetuated by the internet, Hollywood and word of mouth.

Martha Jane Canary was likely born in Princeton, Missouri, in 1856. By the time she was about eleven years old both her parents were gone. She shows up on the Wyoming census in 1868 when she was about twelve or thirteen. Jane is an example of what can happen to a young girl who grows up poor and unsupervised. Prostitution and alcoholism, probably in that order, was the fate of many a young girl.

The facts around the origin of her name are blurred by her word, versus the historical record. There were many people in the west known as Calamity. Jane was also a name often used by women of easy virtue or those who did not want their name known. There was even a man in the 1870’s known as “Calamity Joe”. Martha Jane Canary, claims she saved the life of an Army Captain during a fight with Indians and was thus given her sobriquet. History does not bear this out.  Regardless of how she got her name, by 1875 she was Calamity Jane.

Jane did dress like a man but she also dressed like a woman. She could ride and shoot. Whether or not she wore a dress or pants, may have depended on whether she was making her living from the back of a horse or on her back.  She was probably neither feminist nor a woman with gender identity issues.  She was just trying to stay alive the best way she could find.  Riding and shooting may have been more fun and interesting than doing laundry.

She learned as a teenager that places where there were men, were her source of nourishment in the form of attention, drink and money. Mining camps, railroad camps and forts became her home. She was probably never a scout but more like a mascot or camp follower, along with other women of easy virtue.  Because she could ride and shoot, she may have proven her worth as something more than a prostitute. The only problem was, she was often drunk which may have negated her value as a functioning member of any party.  Her claims of being part of various military expeditions does not follow the historical timeline.  She claims to have been with Custer on an Arizona campaign in 1870, as a soldier.  The problem is, Custer was not there in 1870.  There are no extant records of her being employed by the military, with Custer or on any other of the campaigns on which she claims to have participated.

She did not have a romantic relationship with Wild Bill Hickok nor did she have any children with him. She did have a daughter, whose paternal parentage is questionable.

Regardless of the false narrative she spun and the embellishments by some reporters, she did know many famous people in the West and at times led an exciting life. Unfortunately, much of it was spent under the influence of a great deal of alcohol.

She was never part of Buffalo Bill’s Wild West Show although she knew him. She did ride in the Pan American Exhibition in Buffalo, New York, in 1901.

The portrayal of her in the television series Deadwood from 2004, as a cursing, alcoholic, prostitute who could use a gun, is probably not far from reality. Conversely, Doris Day represented her in the 1950’s as a squeaky-clean, pretty woman who could sing and wore tight buckskin.

Calamity Jane died a desolate woman, sick in body and mind, at the age of 47, in a small hotel room in the town of Terry, South Dakota, not far from Deadwood.

For a more in-depth read on Calamity Jan, see CALAMITY JANE The Woman and the Legend by James D. McLaird. 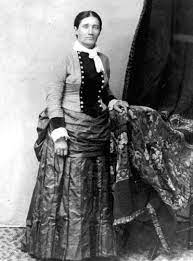